The Off-Topic forum for anything non-LDS related. No insults or personal attacks allowed. Rated G.
Post Reply
8 posts • Page 1 of 1

US archbishop bans Pelosi from communion over abortion rights support

Speaker of the House of Representatives Nancy Pelosi, a lifelong Catholic, has been barred from holy communion by the archbishop of San Francisco over her support for abortion 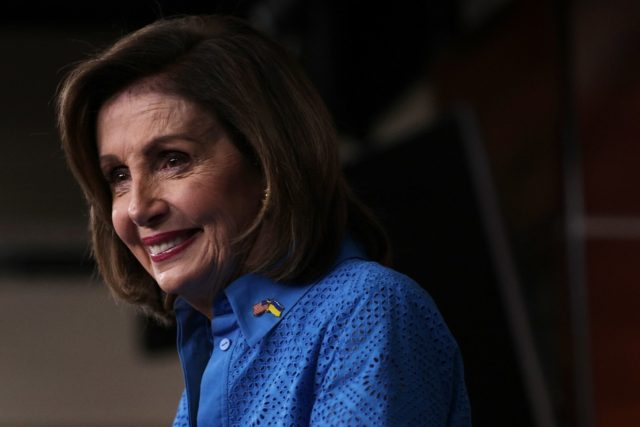 The archbishop of San Francisco told US Speaker of the House Nancy Pelosi that she is barred from receiving communion over her support for abortion rights, the archdiocese said in a letter released Friday.

Archbishop Salvatore Cordileone said he in the letter that he had previously asked Pelosi to “publicly repudiate your advocacy for abortion ‘rights’ or else refrain from referring to your Catholic faith in public and receiving Holy Communion” — or face the consequence of being denied access to the rite.

“As you have not publicly repudiated your position on abortion, and continue to refer to your Catholic faith in justifying your position and to receive Holy Communion, that time has now come,” the archbishop said.

“I am hereby notifying you that you are not to present yourself for Holy Communion and, should you do so, you are not to be admitted to Holy Communion, until such time as you publicly repudiate your advocacy for the legitimacy of abortion and confess and receive absolution of this grave sin in the sacrament of Penance,” he added.

Pelosi, a lifelong Catholic from California, said she would work to pass a law to confirm women’s continued right to abortions after the leak of a draft Supreme Court opinion overturning Roe v Wade, the 1973 ruling that guaranteed access to the procedure nationwide.

Pelosi’s office made no immediate comment to AFP after the archbishop’s letter was made public.

Communion — the rite in which the faithful ritually consume bread and wine blessed by a priest — is a central rite in the Catholic Church.

https://www.breitbart.com/news/us-archb ... s-support/
And when the Confederates saw Jackson standing fearless like a stonewall, the army of Northern Virginia took courage and drove the federal army off their land.
Top

So another example as to why religion poisons America, freedom, and liberty.

Another religious nut defying his own Pope.
"I am not an American ... In my view premarital sex should be illegal" - Ajax18
Top

In 2021, the Pope gave a press conference in Hungary and was asked this question and gave this long, and pretty nuanced, answer:

O’Connell: You yourself have said that we are all sinners and that the Eucharist is not a prize for the perfect, but a medicine and nourishment for the weak. As you know, in the U.S. after the last elections, but also since 2004, there has been a discussion among bishops about giving Communion to politicians who have supported pro-abortion laws and a woman’s right to choose.

And as you know, there are bishops who want to deny Communion to the president and others, there are other bishops who are against it, there are some bishops who say that the Eucharist should not be used as a weapon. What do you think about this reality and what do you recommend to the bishops? And then as a second question, have you as a bishop in all these years publicly refused the Eucharist to anyone?

Simply, the only time I had a funny thing happen was when I went to celebrate Mass in a nursing home. And we were in the living room and I said: “Whoever wants Communion, raise your hand.” And everybody, they were elderly, raised their hands. And I gave Communion to one lady, and [afterward] she took my hand and she said, “Thank you, Father, thank you, I’m Jewish.” She took my hand. Even this one I told you about was a Jewish woman and yet, onward. The only strange thing. But the lady told me afterward.

Second, the problem of abortion. Abortion is more than an issue. Abortion is murder. Abortion, without hinting: whoever performs an abortion kills. You take any embryology textbook of those students that study in medical school. At the third week of conception, at the third, many times before the mother notices, all the organs are already there. All of them. Even the DNA. [...]

A head of state was telling me that the decline in population started with the age of abortion. Because in those years there was such a strong abortion law that six million abortions were performed and this left a very large decline in the society of that country.

Let’s think about the night of St. Bartholomew: Heretics, yes, heresy is very serious [...] everyone, it’s a political fact. Let’s think about Joan of Arc, with this mission. Let’s think about witch-hunts. Always we think of Campo de’ Fiori, Savonarola, all these kinds. When the Church, in order to defend a principle, does not do it pastorally, it takes sides politically. And this has always been the case. Just look at history.

What should the pastor do? Be a shepherd, do not go around condemning, not condemning, but be a pastor. But is he also a pastor of the excommunicated? Yes, he is the pastor and he has to shepherd them, and he must be a shepherd with God’s style. And God’s style is closeness, compassion, and tenderness. The whole Bible says that. Closeness. Already in Deuteronomy, He says to Israel: What people have gods as close as you have me? Closeness. Compassion: the Lord has compassion on us. We read Ezekiel, we read Hosea, right from the beginning. And tenderness -- just look at the Gospel and the works of Jesus.

A pastor who does not know how to manage with God’s style slips and he adds many things which are not pastoral. For me, I do not want to particularize [...] the United States because I do not know the details well, I give the principle.

You can tell me: but if you are close, and tender, and compassionate with a person, you have to give Communion -- but that’s a hypothetical. Be a pastor and the pastor knows what he has to do at all times, but as a shepherd. But if he stops this shepherding of the Church, immediately he becomes a politician. And you will see this in all the denunciations, in all the non-pastoral condemnations that the Church makes. With this principle, I believe a pastor can act well. The principles are from theology, the pastoral care is theology and the Holy Spirit, who leads you to do it with the style of God. I would venture to say up to this far.

Pope Francis: If you say to me: but can you give or cannot give [Communion]? It is casuistry, as the theologians say. Do you remember the storm that was stirred by Amoris laetitia when that chapter on accompanying separated, divorced couples came out: “Heresy, heresy!” Thank God there was Cardinal Schönborn, a great theologian who clarified things.

Mixing politics with religion makes for bad politics and bad religion. Although the archbishop denies being politically motivated, Pelosi's stand on the law and abortion has been consistent for decades. Other than politics, what reason is there for the archbishop taking this action today,? If, as the Pope says, the giving of communion is a pastoral issue, whether Pelosi receives communion should be between her and her priest. In fact, I'm not clear whether the archbishop's announcement will result in Pelosi not receiving communion.
he/him
"Everything we see hides another thing, we always want to see what is hidden by what we see."
– Rene Magritte
Top

It sure seems like Pope Francis has no problem mixing politics and religion when it suits him. I.e. immigration, private property, covid.
And when the Confederates saw Jackson standing fearless like a stonewall, the army of Northern Virginia took courage and drove the federal army off their land.
Top

Maybe you should denounce being a Christian like you already denounced being an American.
"I am not an American ... In my view premarital sex should be illegal" - Ajax18
Top

The Archbishop will be read the riot act by the Vatican unless this is a deliberate wish to migrate congregants to the Anglicans or Episcopalians.
Cry Heaven and let loose the Penguins of Peace
Top

I'm happy that my birth mom didn't abort me. She sure made two adoptive parents very happy. I feel like I have done some good in the world. So, thanks, B.J. for hanging in there for nine months. I love you. I'm glad I got to meet you.
And he made from one man every nation of mankind… having determined allotted periods and the boundaries of their dwelling place, that they should seek God, and perhaps feel their way toward him and find him. Yet he is actually not far from each one of us.
Top

ajax18 wrote: ↑
Sun May 22, 2022 2:03 pm
It sure seems like Pope Francis has no problem mixing politics and religion when it suits him. I.e. immigration, private property, covid.