IE. the name that is above every name.

One does hope the Nelson family hasn’t been celebrating the wrong birthday for their one boy for the past 50 years.
Top

Here's the DesNews reporting on that talk by S. Dilworth Young in Gen Conf on April 8, 5 days prior to Spencer Kimball's heart surgery. 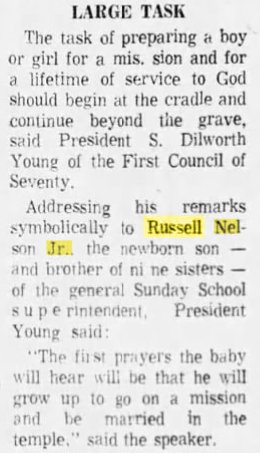 
And, here is a snip from the Box Elder Journal, dated Mar 30 1972 (a Thursday), 8 days after the birth of young Nelson.
I note here, Nelson Jr.'s name is not stated in the article. 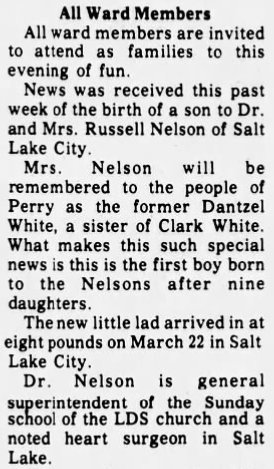 
Was not able to locate an article regarding the blessing of young Nelson Jr.
However, I did find an article confirming April 12 as the surgery date for Spencer Kimball. 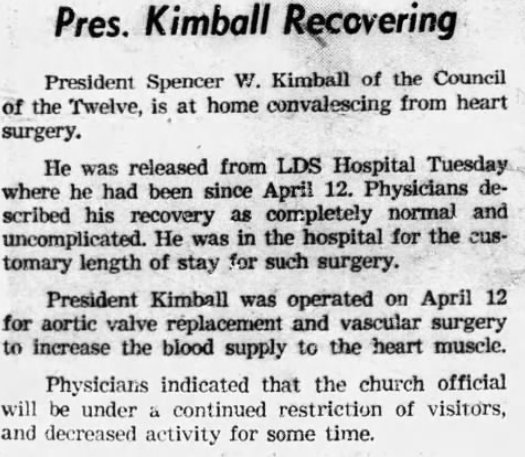 Well, that's kinda swell. Good for him. He reached 98. May he live to 120 and enjoy all his faculties and every blessing. I don't really care for him, but I wish him every happiness.
"Stubborn audacity is the last refuge of guilt." ~ Samuel Johnson
Top

Dr. Moore, Nelson miswrote the date of birth in your passage quoted. However, he correctly cites it as occurring on March 21 in his CV and Highlights of 1972. By the way, two of the newspaper clips that you posted state that Jr. weighed 8 pounds at birth. According to Russell's account, however, Jr. weighed 12 lbs! (That being said, Jr does look kind of pudgy in this photo -- to me at least). The following is Jr's birth announcement: 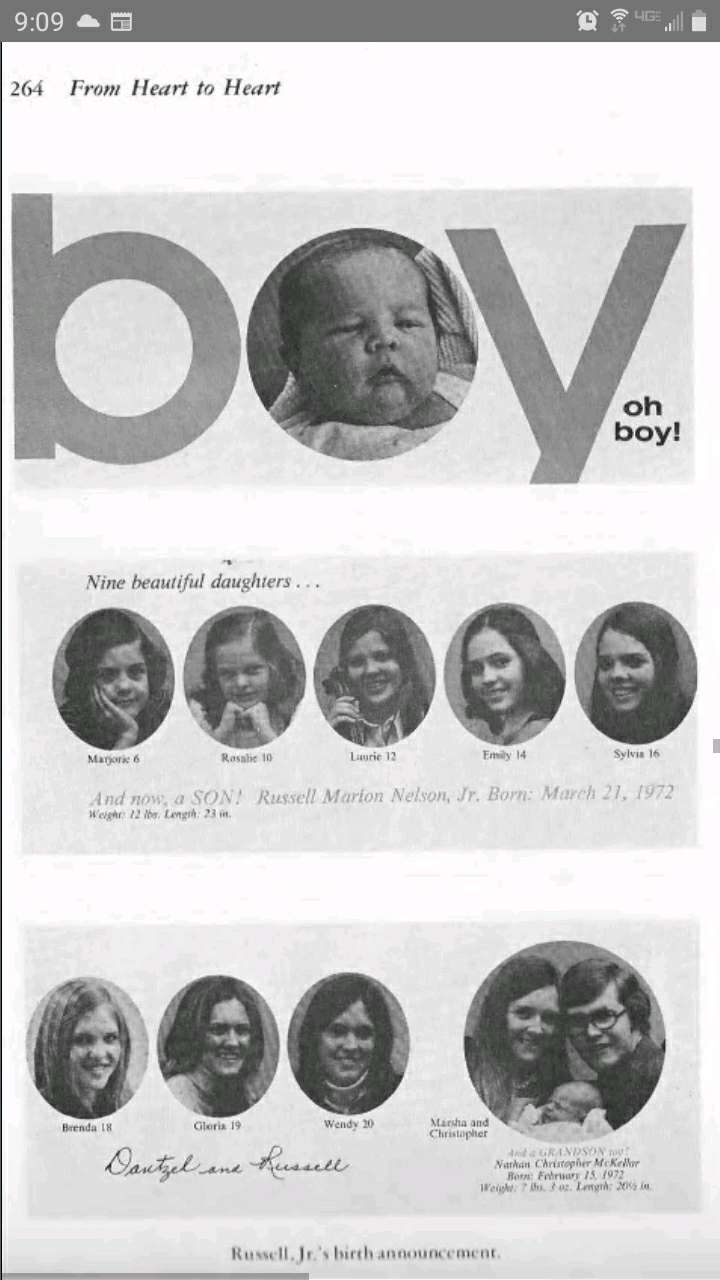 ”Russell M. Nelson” wrote:One autumn night in 1957, Dantzel awakened me with a very special announcement. She said, ‘‘During the night I had a remarkable vision. It was more than just a dream. I saw a little baby boy. He was a very special, handsome child. He had a round face and lots of hair; he looked just like you! I had a wonderful visit with him.”

I didn’t pay a great deal of attention to this announcement at the time, even though our sixth child was on its way. I began to pay more attention to it, however, as repeatedly over the next few years she indicated she had received a visit from this same little boy. In fact, it became so much a part of our life that after one of these visions she would simply say, “I saw him again. He’s such a sweet and special young boy.”

Over the years from that first manifestation, we greeted Emily, Laurie, Rosalie, and Marjorie into our family, each one bringing her own special spirit. Yet, Dantzel had the firm conviction that our family was not completed. Therefore, in her forty-sixth year, not enjoying the best of health, she willingly and selflessly embarked on her tenth pregnancy. We had a beautiful family of nine daughters. We had been married over twenty-six years. She knew the statistics were not favorable for a multiparous person such as she, in her forty-sixth year, to have another baby. None of that dissuaded her, for her faith was strong.

On January 22, 1972, I was in Sun Valley, Idaho, speaking at a meeting of the Idaho Heart Association. I was given a very lovely room in the Sun Valley Lodge—a fire in the fireplace and all that went with it. All alone in that room, I retired for the evening. In the middle of the night I was awakened with a very real experience. I cannot remember who gave the message—that is of no importance. But I do remember as surely as I live that it was announced to me that this time Dantzel’s pregnancy was with a son, he who had been appearing to her through the years. Furthermore, it was impressed upon my mind that his name should be Russell Marion Nelson, Jr.

The following morning I called Dantzel long distance and told her of the experience. She was moved by it, for she knew that with each of the nine children prior to this, the discussion of an alternative name, should it have been a boy, had never included Russell Marion Nelson, Jr. We had a bit of prejudice against having a young man called “Junior.” But we knew this had been an experience that deserved considerable attention and so we planned accordingly.

When Marsha and Chris had a baby boy on February 15, 1972, our first grandson, named Nathan Christopher McKellar, we began to work on a composite birth announcement, We thought it was a special circumstance for a family of nine daughters to be blessed with a grandson and the prospects of a son. The announcement we created was entitled “Boy, oh boy!” and contained pictures of all the nine daughters, our son-in-law Chris, their son, Nathan, and space on the front for a picture of our yet-to-be-born son, Russell, Jr.

Prior to Dantzel's delivery, the obstetricians were somewhat concerned over the prospects of her having a successful labor. Although she’d had nine previously without significant difficulty, she hadn't been forty-six years of age for any of them. As she went into labor, she was having good, hard contractions, but the baby was not making any progress down the birth canal, nor was the cervix dilating as it should. Assuming that this problem was occasioned by the lack of muscle tone in the uterus, a drip of Pitocin was started intravenously. Over the next few hours, as the drip of this powerful uterine stimulant was under way, Dantzel’s blood pressure began to soar. She broke out in petechiae all over her body. When her blood pressure went to 220/120, I summoned Dr. M. S. Sanders, our obstetrician, and his consultant, Dr. John Z. Brown, and told them I feared for her life. I felt that this baby must be born by cesarean section, and they very wholeheartedly agreed. Within the hour, on March 21, 1972, Dr. Sanders operated on Dantzel. I was in the operating room close beside my darling to comfort her as she was given a general anesthetic. When Dantzel’s abdomen and uterus were laid open, at 1:13 pm., Dr. Sanders reached in and lifted out a large, handsome, well-formed son, who appeared to be perfect in every detail. He was an enormous baby, 23 inches long and weighing 12 pounds! No wonder she couldn’t advance him through the birth canal. While she was still under the anesthetic, tears filled my mask as I phoned home and asked the girls if they could hear their little brother crying. Screams went up that were audible all through the operating room.

I stayed beside Dantzel during the recovery period as the anesthetic lightened and ultimately wore off. After she awakened, the nurses brought the baby to her side and nestled the child against her bosom. It was then that she first saw the infant. She looked at that face, a round little fat face, and the abundance of dark hair. Her eyes moistened as she exclaimed, “He’s the one! He’s the one I’ve seen and known for all of these years!”

I’ve always known Dantzel to be especially close to our Father in heaven, but the events surrounding the birth of our tenth child and first son, Russell Marion Nelson, Jr., brought me to a realization that she was entitled to maternal communication beyond that ever deserved by a man. Her revelation was exceeded only by her faith and her compliance and willingness to do what was necessary to give life to this son who was waiting to come.

Her sacrifice for him and her willingness to go into the valley of the shadow of death that he might be were well on my mind as I gave him a name and a blessing, a copy of which follows. As mentioned earlier, I consulted with President Spencer W. Kimball on the matter of naming the child, and he also felt that the name Russell Marion Nelson, Jr., was appropriate.

On March 31, 1972 [sic], our son was born! Today, in the Yale Ward chapel, I had the great privilege of giving him a name and a blessing.
This is what was said:

Less than two weeks later, as we were attending general conference[sic], Elder S. Dilworth Young began his speech with the story of little Russell's arrival. [Note: S. Dilworth Young actually gave this conference address before the date of Jr’s blessing.https://abn.churchofjesuschrist.org/stu ... 4?lang=eng.] Later, Elder Young visited our home and gave a copy of his manuscript to Russell for his records. So after this spiritual and auspicious start, we felt our family was complete, knowing that this long-awaited son was now safely in our home. I looked upon him as tithing in reverse, for I was always taught that I should give the Lord a tenth. Now the Lord had given me a tenth, far beyond any deserving of mine. Abraham was required to offer Isaac in sacrifice. Our Heavenly Father literally offered his son, Jesus, in sacrifice; and yet they, in their ultimate goodness, wisdom, and gracious generosity, had blessed us with a gift—a tenth child, a son.