“My nonchalant awesomeness hurt you?? Bummer.”: A Mopologetic Myth Deepens

Well, when sussing out the facts of the ‘class president’ story I saw a picture of Dan Peterson, and he was a handsome fellow, but was suffering from early onset male pattern baldness. As some people are apt to do, perhaps Little Peterson didn’t feel too good about that, and tended to self-aggrandize or, in his case, become a high achiever to compensate for a thing he didn’t like. I don’t say this as a slight at all, like I said Little DCP was a good looking cat, I’m just stating there might’ve been a reason behind the behavior.

Doctor Scratch wrote:But I wonder if you might draw a clearer connect with the story about crushing the would-be senior class president

As an aside on "Mopologetic uselessness", if there is any one thing that this guy can't stand, it's someone from the underclass making light of Mormonism or questioning their faith, or questioning Mormonism as an outsider. How dare they? That's why particulars are rarely defended, and the argument is generally to show evidence of leisure, and the evidence of leisure of his Mopologist friends. Once the questioner is made to understand that they are lesser as human beings, that they are the underclass and the Mopologists are the upper-class in a very 19th century way, there's nothing else left to say because if the aristocracy believes, then the matter should be settled. Who are these commoners to discuss business and politics with us?

MST is about one aspect of leisure, the Phd. But we've seen a variety of plugs within this antiquated framework of class. Being too busy with travel to answer a question, for instance. Having an important dinner with somebody important, therefore, the Church is true. Noting years ago that Lou Midgley and his wife were, at the time, "lost in the theaters of Europe", therefore Midgley wouldn't be available to (doesn't need to because he's too important) respond to some point a critic made. Having a musicologist explain the theoretical aspects of some hymn on Christmas Eve, therefore, how dare these uncultured atheists question the risen Lord? It's even gone so far as to make out Schryver of all people, to be a soft-handed gentleman. You recall how he described Schryver frequenting a classy wood-fired pizza establishment where he spoke Italian with the staff?

I guess I'm getting carried away, but this is barely the tip of the iceberg. The Mopologist is doing something useless right now, therefore he is right and you are wrong.

Anyway, I think you pointed out the main thing with being senior-class president. In his case, it was entirely a status symbol, as he didn't care about it, and probably didn't make any effort to make the school better. It was a matter of self-importance, underscored by the absence of effort that he put into his campaign when contrasted with the great effort that his opponent put into his campaign. It's all about inherent greatness. Not greatness because you tried hard and competed well and won, greatness because you were inherently superior and didn't have to try. Remember the film Amadeus? Antonio Salieri would be like that guy running for class president, and Amadeus would be like DCP. It can be a little confusing to think about because supposed conflicts like the one between Amadeus and Salieri don't necessarily have to reflect a person of leisure and a person of labor, obviously, commoners have been far more talented than nobility in history, but these are symbolic examples for how the aristocracy define themselves.

I'm sure such a worldview was aided substantially by a love of Added Upon, which teaches of a premortal "master race". Certain people like himself were "those of whom I will make my leaders". The important people who don't have to try, the nobility who are envied by the commoners.
Top

Doctor Scratch wrote:But I wonder if you might draw a clearer connect with the story about crushing the would-be senior class president

Anyway, I think you pointed out the main thing with being senior-class president. In his case, it was entirely a status symbol, as he didn't care about it, and probably didn't make any effort to make the school better.

This. This is it and it really says everything about Mopologetics, and about who DCP fundamentally is as a person. No: of course he doesn’t talk about how he improved the school, because presumably, just like with his Mopologetic career, he’s never been interested in “improving” anything. The lone thing he can point to in his entire life that comes anywhere near that was METÍ/ISPART, and yet as we all know, he walked away from that and abandoned it.

For the most part, he’s been about trying to tear other people down because they dared to criticize the Church, or he’s engaged in this endless, stupid self-aggrandizement regarding his “leisure class” status. It’s as if he’s resigned himself to this basic position of, “Well, it’s too late for me to do anything genuinely positive and noteworthy, so I might as well brag about my travels!”

Seriously: imagine if you were senior class president, and the main thing you remembered was that your opponent was reduced to tears due to losing? Or that one of the chief memories from your mission was “humiliating” some Christian “basher”? And even if these aren’t his most important memories from those periods of his life, it’s what he’s chosen to share publicly.

“Witnesses” was pretty clearly a last-ditch effort to do something meaningful, but it was a box office disaster, so it’s really no wonder that he’s clinging desperately to NDEs and other fantasies of getting a “do-over.”
"If, while hoping that everybody else will be honest and so forth, I can personally prosper through unethical and immoral acts without being detected and without risk, why should I not?." --Daniel Peterson, 6/4/14
Top

Wow what a revealing thread with spectacular insights into the psychology of many Mopologists. You guys appear to me to have just NAILED IT! Thanks for sharing! The hoity toityness of it all is hilarious relevant! I have not been able to actually put my finger on it, but you have!
Top

Not that I’m in the habit of defending an apologist, but Little DCP nabbed the Junior Civitan of the Month for September while attending school. See here for proof: 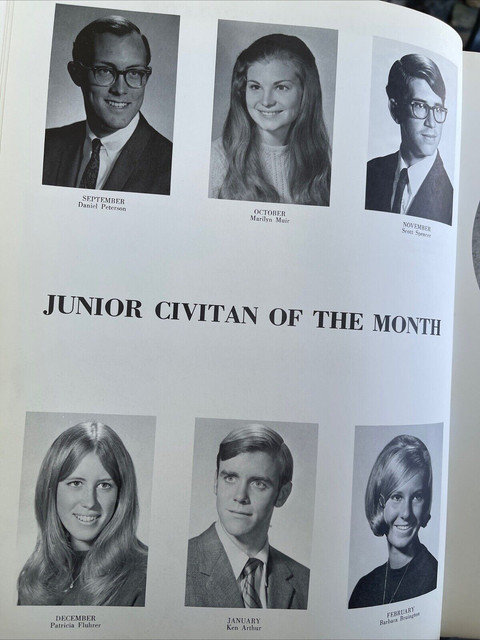 What is a Civitan? From the Civitan Internal website:


For more than a century, good citizens around the world have worked in tireless service to impact the lives of those in need. They call themselves Civitans.

Beginning with one local club in 1917, a group of business leaders in Birmingham, Alabama formed a global organization based on the empowering message of fellowship, knowledge and service to others. Within a decade of that first meeting, more than one hundred Civitan clubs were born.

And what is a Junior Civitan?


As Civitan International’s longest standing program, Junior Civitan International brings together thousands of middle and high school students across the globe in the name of service. Our hundreds of clubs participate in service projects like school clean-ups, collection drives, awareness campaigns, and volunteer activities at local agencies or in their own schools with their peers who live with an intellectual or developmental disability. In addition to serving their communities, Junior Civitans have an incredible opportunity to grow in their leadership skills by holding officer positions at the club, district, or international level. Being a member in-good-standing opens up a plethora of opportunities to grow in their skillset, meet Junior Civitans from across the globe, receive scholarships, and create memories that will last a lifetime. Find your local club or start one in your school today and join our efforts to make the world a better place!

Granted, I have no idea what he did as a kid to be named as the JC for Sep., but I’d guess it was something civic-minded.

This observation in no way detracts from Gadianton’s post above, it’s an excellent analysis of Mopologist motivations. It’s too bad that Dan decided on a course where a clearly smart, civic-minded young man, with potential and opportunity at his fingertips, chose to fritter away his time and talent on nonsense. Shame. :/

An interesting observation: Dan's years of mischaracterizing his critics appears to be working. His cult of 4-5 regular commenters on his blog have been assured that no credible source has ever caught Dan in a lie, or refuted any of his (very original not tired and worn) apologetic arguments. No, it's been a fiesta of churlish howling with not a single brain cell between any of us.

After reading from Dr. Peterson about these "haters of ill-repute," I am oftentimes curious what their lives must be like. To base the majority of one's existence upon hatred of any one object, be it a place, a thing or a person as an answer to their daily contribution to the world seems churlish, simpleton-ly and most assuredly, depraved.

It is not a hard thing to discover that even the attempt to base one's life on the concept of loving others to be radically difficult, an easy habit to break and not at all something which anyone should jeopardize by enduring even mere moments of hating something. The negativity of hate is so destructive to the soul that even minutes of being seduced by hateful feelings results in the breakage of weeks of devout attempts to learn or practice love.

I believe it is for these reasons that Christ explicitly taught to love one's enemies, to treat well those who despitefully use you, and to turn the other cheek...

You can't follow Christ in love if all you practice is hate.

I love Daniel Peterson, but I hate the lies he tells in the service of his corporation. Love the sinner, hate the sin. He's a product of the toxic culture Smith started decades ago. I have real hope that someday Daniel will put the truth before money and fame. It's not much money, and it's not much fame, but it's enough to keep him satisfied as the big fish in the small pond. He could do some real good in the world if he publicly acknowledged he's been fecklessly bailing out a sinking ship, the Church of the Bretheren, with his propaganda for decades. He could follow in the footsteps of many former FAIR members and actually recover some of his reputation in the end. Or he could die like Bill Hamblin, who will be quickly forgotten as just another footsoldier, more cannon fodder wasted defending a dying nepotistic organization.
Top
Post Reply
36 posts