I will admit, a part of me really hopes Nelson survives to celebrate his 99th on 9/9 next year. Such numerical alliteration is sure to bolster testimonies. 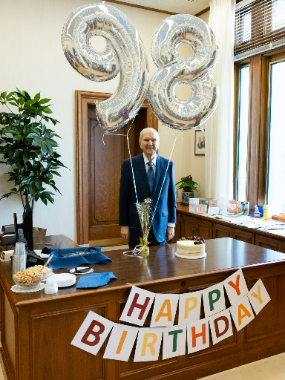 
Click on the newsroom article (linked above) and you'll find one quote each from Nelson's counselors, Oaks and Eyring.

This gem by Eyring, really got my wheels spinning.


President Henry B. Eyring, Second Counselor, expressed his thoughts about President Nelson’s role as the Lord’s prophet. “Every time we walk out of the office, President Oaks and I say, ‘It happened again.’ You’ll just see revelation come. You’ll see him ask for counsel, and then the decision will come and everybody in the room knows it is right and from God. He just quietly says, ‘I think this is what the Lord would want us to do.’ It’s just time after time.”

Wow! Or rather, wow?

All that buildup from Eyring, and the prophetic declaration comes in the form of I think this is what the Lord would want us to do? I read this and all I hear is fizzling balloons and that loser horn from The Price is Right.

Future generations may look back and see Eyring revealing a neutered prophet, someone with no confidence in what he's doing, but also an attention seeker who knows those around him now have no choice but to hang on every subtlety. He's milking it. He doesn't even have to pretend anymore.

Because to my ears, it sounds a lot like Eyring has attributed a lame, weak sauce delivery to Nelson's prophetic utterances. Something like: if the Lord existed, my guess is that he, or she or it, would probably want us to do what we've all just voted on doing.

"You’ll see him ask for counsel, and then the decision will come and everybody in the room knows it is right and from God. He just quietly says, ‘I think this is what the Lord would want us to do.’ It’s just time after time.”

Eyring just outlined that Prophetic revelation now amounts to their best guess. No mention of a light in the room, no burning in the bosom. Just a guess. Time after time.
Top

They all know the whole thing is a big ruse but they're benefiting tremendously financially as will their posterity from a gargantuan multi-hundred billion dollar global real estate corporation and so they continue to pretend and play the game as if they're communicating directly with heaven (as a Babylonian corporation masquerading as a religion for tax-exemption). All you have to do is read the 12 buried essays on their website not to mention all the dozens of other shorter ones as well as researching the life of Joseph Smith to conclude the 'church' is nothing but a fraud created out of a fictitious story orally dictated to a scribe by looking at a stone in a hat with no gold plates even present.

At this point, what I'm trying to figure out is why they continue with the charade when they don't need tithepayers anymore? Why try to continue getting people to join and/or believe in the religion if you don't need members' money??? Is it some sort of ego-stroking thing these guys get off on, who are nothing more than business executives? I can still remember when Eyring and Monson were perpetuating the notion back in the late '90's that the 'church' had no paid clergy (local leadership aren't paid but the '70's, Q12 and FP are) while they were being paid almost six figures with perks galore.

No shame, no integrity and no honesty, just deception, but stay worthy brothers and sisters!

Oh, and pay an honest tithe so we can invest it into interest bearing accounts with which to build malls and real estate with or invest in the stock market since that's what Jesus would do. You can't make up this stuff!
Top

I had a real feeling like Monson and Hinkley were good men. Of course, now having read many stories about the office politics going on behind the scene, it tempers that image for me a bit.

I have not had any such feelings about Rusty. He seems to have the stereotypical surgeon's God Complex and narcissism. It's very very difficult to see him as in any way as likable as Monson and Hinkley.
Top

I have no doubt that Eyring and other apostles are the truest of believers. But, moments like this just show that the leaders are every bit as starved for revelation and prophecy as regular members are. It is actually kind of pathetic to note the disparity between what prophets are said to do and what the members accept as that fulfillment. We are at the point that mundane policy decisions like changing the missionary age from 19 to 18 are received as if grand revelation. People want it so much they will take crumbs and call it a feast. It is interesting to see that occurring at the apostle level, too.
Top

The funny thing is that when I first read the quote, and it's probably my tbm circuitry working overtime to regain a foothold in my brain, I thought that Eyring was trying to say that "I think" equates to the "spirit" moving on the old guy. His thoughts are the "lord's" ... because he is in tune ... and doesn't drink coffee, etc. We've been told that year after year. However, lol, it really should be read as Eyring admitting that the old guy is just guessing as we all know.
Myth is misused by the powerful to subjugate the masses all too often.
Top

Or maybe he’s trying to damn with faint praise. I mean it’s a low bar.
Top

These guys are all a bunch of type A competitors. I have to think it's hard for the subordinates to praise their leaders when deep down they must all feel as if they are the most special.
Top

I wonder how many believers think that revelation coming from the top is more like the person in charge is sharing opinion. That person when called by God still has thoughts and feelings, preferences, biases, desires, hopes, like anyone. But with that person in charge, their opinion happens to matter most when they are called and during their time in office. God doesn't really speak to humanity, he subtly hints through impressions and feelings inside that person and that person when speaking gives us the best approximation of what he thinks God really wants. The consequences often mean God's will is hardly ever really communicated, even though it is said it is always communicated. Quite often, more so than otherwise, the proclaimed will of God has to completely wrong. His will is actually something else. But it's as good as we'll get and in time, someone will get put in charge who will fix the opinions of those in the past.

I mean if there is a god and Mormonism is his favorite, it'd have to be that way. Seeing it that way would also give believers plenty of space for remaining a believer but not really accepting most of its teachings.

Alright I say this because it's not far at all from where I was as a believer. God wasn't giving revelation, as I saw it back then, he was letting leader's opinions matter most and in time will find ways to correct them. We just happened to call that revelation. Once I started comparing that to how companies run, or any organization, I realized there really is no difference. God could be inspiring Jeff Bezos just the same. If so, what are we even to make of such a character we can't really get anything out of?
“Every one of us is, in the cosmic perspective, precious. If a human disagrees with you, let him live. In a hundred billion galaxies, you will not find another.”
― Carl Sagan, Cosmos
Top

dastardly stem wrote: ↑
Wed Sep 14, 2022 4:22 pm
The consequences often mean God's will is hardly ever really communicated, even though it is said it is always communicated. Quite often, more so than otherwise, the proclaimed will of God has to completely wrong. His will is actually something else. But it's as good as we'll get and in time, someone will get put in charge who will fix the opinions of those in the past.

Well said. If this apologetic had been put forward from day one, that would have been nice. But unfortunately church leaders have been backed into a corner, with an accumulation of so many fatal errors committed in God-speak. So this apologetic is a half open window to escape through, even if it takes so much wiggling and thrashing, the whole scene is often rather like a Three Stooges comedy scene.
Top
Post Reply
55 posts