Re: Vogel's new book on Abraham

Vogel wrote:Smith therefore identified Ta-sherit-Min's scroll and the Nefer-ir-nebu vignette as the record of ancient Joseph just as he identified Hor's scroll as the Book of Abraham. This raises an obvious question: Since Gee and Muhlestein have argued that the the Book of Abraham was on the same scroll as Hor's Book of Breathings, do they also want us to believe a real Book of Joseph was attached to the end of Ta-sherit-Min's Book of the Dead? One wonders if they have thought sufficiently through the implications of their "long-scroll" theory.


Oh, they have thought about it long and hard, you can be sure of that. But they are not paid by the Church to undermine faith in Smith's claims in translating the Book of Abraham and the promise to someday translate the Book of Joseph. Gee & Muhlestein are paid to put a spin on anything and everything to go in the direction they want it to go.

Vogel mentioned that Oliver Cowdery wrote a piece in the Messenger and Advocate wherein Cowdery mentioned specific vignettes on the papyrus and how those things related to ancient biblical themes. Does Gee believe those vignettes are part of the Book of Joseph? Or, is the Book of Joseph attached separately at the end of the scroll as Gee postulates is the case with the Book of Abraham on Hor's scroll?

Wikipedia wrote: The deceased sitting on a mat before three Gods, which Cowdery described as "The representation of the god-head." 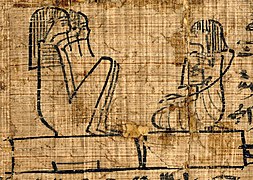 The deceased standing before a walking serpent. Cowdery said that this was the Serpent of Eden. 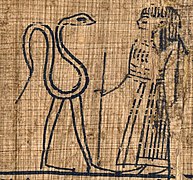 The deceased striding in front of a pillar which represents the city Heliopolis. Cowdery associated it with "Enoch's Pillar." 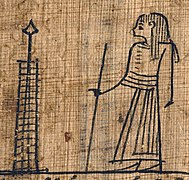 These are questions that Gee will not answer. I'm quite confident that John Gee has no expectations whatsoever that there was actual writings anywhere on that scroll wherein he could translate it into a so-called Book of Joseph. Gee can translate the writing around the vignettes and it doesn't translate into the Book of Joseph, let alone the things Cowdery said they meant. That is a problem!

Not only do defenders have the writing of the Facsimiles to contend with but also the writing that surrounds Cowdery's vignettes described meticulously in the Church periodical! And where was Joseph Smith during all that? He was right there at Oliver's side.
Here Comes The Book of Abraham Part I, II, III