Reading this thread, I can see why you're in insurance law. I can also see why, if someone told me I had to be an attorney specializing in insurance, I would shoot myself. And then take poison.

Kudos to you, Sir.

Thanks. I recommend adding jumping off of a tall building to the other two steps.

There is nothing worse than being in oral argument in front of a judge and finding out, for the first time, that your position is crap because you made unwarranted assumptions.

When I was searching for material on Nelson a few days ago, this article about Nelson Mandela came up, and it's actually pretty useful as commentary on Rusty.


"There's a story, it's not related to prison, but I am going to tell it anyway. We were once on this airplane flight down in Natal, and it was a prop plane. I think there were six seats in it, and there were maybe four of us on the plane. And as soon as he gets on an airplane he picks up a newspaper. He adores newspapers. He didn't have them for so many years and he revels in the touch of them, and he reads every stupid story. And so we were sitting on the airplane, the plane was up, and he is reading his newspaper, and we're about, I don't know, halfway there ... I was sitting right across from him, and he pointed out the window ... and I saw, to my great horror, that the propeller had stopped going around. And he said very, very calmly, 'Richard, you might want to inform the pilot that the propeller isn't working.' I said, 'Yes, Madiba.' I walked to the front of the plane, and the pilot was well aware of it and he said, 'Go back and sit down. We've called the airport. They have the ambulances out there, and they're going to coat the runway with foam or whatever they do.'
I went back and I told Madiba that, and he just, in that very solemn way, mouth sort of down, listened, and said, 'Yes.' And then picked up his newspaper and started reading. I was terrified, and the way I calmed myself was I looked at him. And he was as calm as could be. Like the prisoners on Robben Island must have looked at him when they felt scared, and he just looked as calm as could be.

The plane landed, no problem. He never changed his expression or anything like that. He put his newspaper down, and we came into the airport, and as we got into the airport and we sort of had a moment alone, he turned to me and he said, 'Man, I was scared up there.' It was such a revelation because that's what courage is. Courage is not, not being scared. Courage is being terrified and not showing it. So I was enheartened. I was given courage by looking at him, because he was pretending not to be scared, and that's what he did for his whole life. The more you pretend that you're not scared, the more not scared you become. The more you inhabit that role, and that's what happened in Robben Island."

I'm less interested in the factual correctness of either story for this comparison, and more about the ideology behind the stories. The Mandela story makes far more sense to me as a story about a hero. Rusty saying that he was perfectly calm and ready to die and at peace just seems weird. As if, he's trained himself to lower expectations to nothing if he's ever going to lose, so he doesn't ever really have to suffer loss. But if that was really his state of mind, it's less the state of mind of a hero or individual of strength you'd wish to emulate, and more like the state of mind of a suicide bomber, or fanatic flying a plane into a building. A guy with a big smile on his face, no fear, just the silent knowing that 72 virgins await him. It's the mentality of a fanatic, not a hero.
Top

I don’t think Nelson’s is a “hero” story. He contrasts his calmness with others’ fear, but he doesn’t credit himself. He credits his religion.

The two stories make a nice contrast. Mandela’s is a more appealing story, I think, for a couple of reasons. First, Mandela isn’t the narrator of the story, so there’s no risk of self-aggrandizement. Second, while both men appear calm, Nelson is calm because he knows he’s going to be okay. Mandela isn’t calm, but tries to appear calm to help others not be afraid.

The Mandela story is also a better constructed story. It’s not cluttered with unnecessary details. And the narrator learns something new and surprising. Nelson just confirms what he already believed.
“Those who can make you believe absurdities, can make you commit atrocities.” -- Voltaire
Top

A friend of mine was able to make contact via email with the NTSB records office, inquiring on aircraft-related "incidents" reported in Utah in November of 1976. Since "accidents" are all available in public databases, this inquiry was specifically addressed to all reported "incidents."

The response, which comes from an @NTSB.gov email address, was:

- Doc
Clinton King commenting on SeN: "My (perhaps) uncommon personal opinion: I find it easier to doubt the accuracy of carbon dating than the historicity of the Book of Abraham narrative." Good, Lord.
Top

Right. The distinction is important. Their public database has all accidents, but not incidents. The incidents search, conducted internally by an NTSB employee, turned up nothing, zilch, nada, for November 1976 in Utah.

So at this point, what we know about aviation in Utah in November 1976:

The two accidents in that public database in Utah in Nov. 1976 were:

https://www.ntsb.gov/_layouts/ntsb.avia ... 1778&key=0
(A Cessna 210 departing Brigham City for local pleasure (returning to the same airport) crashed into a ditch at 4:30pm, pilot + 3 passengers, no fatalities)

As Dr.W said before, circumstances as described by Nelson while en route to Rolfe Kerr's inauguration at Dixie on Nov. 12, 1976 would have, at minimum, required an incident report to the NTSB. Unless I've misread something. So why is it that we find no incident report?
Top

By the way, I looked up that one accident on Nov. 12, 1976, in Brigham City -- the same day that Nelson flew to St. George to offer an invocation. 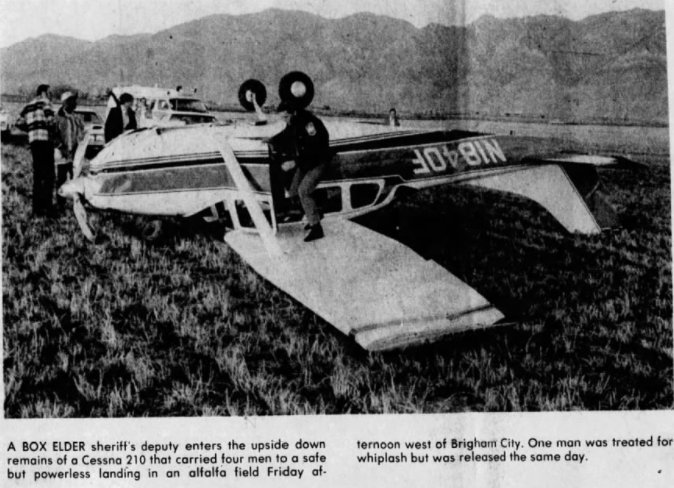 - doc
Clinton King commenting on SeN: "My (perhaps) uncommon personal opinion: I find it easier to doubt the accuracy of carbon dating than the historicity of the Book of Abraham narrative." Good, Lord.
Top

Does it? The definition of incident is lots broader than that for accidents. So, all other things being equal, wouldn’t we expect to see more incidents in a month than accidents.

I think there are two possibilities to consider: (1) November 1976 just happened to be a slow month for incidents: or (2) the NTSB hasn’t retained retained records of incidents that far back, other than those they selected to save in summary form in the database.

The NTSB eFOIA “room” may have information on retention of incident reports.
“Those who can make you believe absurdities, can make you commit atrocities.” -- Voltaire
Top
Post Reply
406 posts