For Huckleberry, Ms. Jack, Jersey Girl, AS, Tim, MSnobody; anybody who considers themselves an established evangelical Christian or simply "Christian" without qualification, I have a question for you.

My right-wing friend caught me totally off guard yesterday. I can google for this, but I'd really like to hear what practicing Christians say for themselves, and for the broader community of Christians before I do so.

As a background: My friend is a dyed-in-the wool right-wing Trump supporter and born-again Christian. He's a good guy but a total moron. To give you an idea, the first time I met him, the mere mention that I'd lived in Utah, and he was scratching his head trying to remember everything he'd learned from some book on cults he'd read thirty years ago. No self-awareness whatsoever. I've had to correct him many times in the past on what he believes as a Christian, or help him with Bible passages he's trying to remember to go against Mormonism.

So anyway, yesterday he was explaining that some random person he knows got a tattoo across his chest of Jesus on a cross. He then went on as an aside, that Catholics and Mormons are guilty of idolatry because when representing the Crucifixion, they put Jesus on the cross, rather than use the symbol of the cross without Jesus on it. And in a moment of sudden realization (or misremembering?) I had to say to myself, you know, it seems true that I seem to recall Christians just wearing a cross as a neckless, that's just a cross, and when there is a cross and Jesus is on it, it's in a Catholic context. Further, we had a lot of religious art in our home, and everything with Jesus in it is either Mormon or Catholic. Sitting here without googling, I can't bring to mind a single image of a protestant version of Jesus.

Further, he went on to explain that we Mormons and Catholics, cults, you know, in our idolatry, portray Jesus as white with blonde hair and blue eyes, but most likely he was dark, if not considered 'black'. Now, this guy who is getting all anthropological on me is the same guy who believes the earth is 6,000 years old. But he insists that "Christians" don't know what Jesus looks like and generally believe he was dark.

From the little I've heard him talk about his congregation, they don't seem to be all about politics. I know they take Covid seriously, didn't have services for nearly a year, and now have heavy social distancing measures. It's possible that he's one the one hand, a run-of-the-mill Fox-news republican, but on the other, just happened to have found a congregation that is more progressive than most. He doesn't see any conflicts but logic isn't his strength. Well, I'm at a loss here, because as I think about it, I've always assumed that Christians like Mormons believe in a Nordic-like Jesus, but just going by memory, I can't recall any conversation I've ever had with an Evangelical on my mission, or any materials I've encountered that establish Jesus as white. I can't imagine that white nationalist Christians believe in a dark Jesus, but I'm thinking more about traditional Baptists, or Pentecostals, do traditional Christians believe Jesus was white? Portray him as white? Is portraying Jesus idolatry? Is portraying him specifically on a cross idolatry?
Top

Oh good grief. You want me to defend this guy?

I'm an American Evangelical. I KNOW that Jesus was dark skinned and Jewish. The first image I ever saw of Jesus looked like this.
https://en.wikipedia.org/wiki/Head_of_C ... n_1941.jpg

Which isn't dark enough or Jewish enough and turns out to be a rip off of a portrait of a Pope's son. This hung at the front of a church my dad pastored. I've actually seen a Del Parsons portrait of Jesus in an Evangelical church.

Some Evangelicals think it's a violation of the second commandments to even attempt to make a artistic representation of Jesus. There is a lot of anti-Catholicism in Evangelicalism that views the crucifix as wrong as opposed to the empty cross. I think there's good reason to prefer the empty cross (and not as morbid), but I wouldn't get my panties in a bunch about it.
Top

Gadianton. To my knowledge there is no solid information on what Jesus looked like. Nordic strikes me as quite unlikely. Perhaps he was somewhat lighter than most Ethiopians. It is conventional that Protestant crosses do not have a figure of Christ while Catholic ones do. How people feel about that varies. I do not see either as idolatry. How a person or group sees this probably depends upon how much anti Catholicism it or they hold. I find anti Catholicism repulsive.
Top

As for what Jesus looks like, I have no idea. My best guess would be visit a city in the western levant and what you see is probably what Jesus looked like. Though I'm guessing shorter as diets worldwide have increased statures quite drastically. If you put a gun to my head I would imagine some shade of darker brown, no more than 5 ft 2 in tall, wearing cheap clothes, and having a Galilean accent. Would be perceived as a "Bubba" or redneck by the Jerusalem elite.
Top

Tim wrote:Oh good grief. You want me to defend this guy?

Lol, not at all, Tim. It was just that, after 3 years or so of trying, the guy finally said something about religion that was new to me, and that I could learn something from. So It's actually a positive thing on his part that something stuck with him that was worthy of repeating.

Your answer broadly confirms what he was saying, and yeah, I am kind of blown away because it's such a simple thing that I probably should have known given all my interactions with Christians over the years, but has never come up.

It sounds like the three of you broadly agree.

I brought it up to him this morning and he vehemently disagreed with Aristotle Smith's note that images are okay for Baptists.

One more thing. There is a difference between disallowing images, and having an opinion on skin color, or is there? Are there some churches that say, okay, it's wrong to paint pictures of Jesus, but still insist that he was white?
Top


Above links shows winning picture of jesus based on a contest by the national catholic reporter selected by art expert sister wendy beckett.

this jesus is dark almost black but the pix stirred lots of pushback from RCs who liked the classic reformation/counterreformation portrayls.
Top

I brought it up to him this morning and he vehemently disagreed with Aristotle Smith's note that images are okay for Baptists.

One more thing. There is a difference between disallowing images, and having an opinion on skin color, or is there? Are there some churches that say, okay, it's wrong to paint pictures of Jesus, but still insist that he was white?

I am taken aback. With a few grotesquely heretical exceptions such as christian identity(I think that is that correct name ) churches do not teach Jesus is white. It is true that images of him made by Europeans make Jesus look like an ideal European king. There are lots of people who may assume he looked like that, it is a familiar image.

Do I think a lot of Christian people have treated dark skinned people as less than human because of that image constructed of pure ignorance?

Yes.
''''''''''''''
I thought my memory about use of images for different Christian groups might be a bit fuzzy. I reviewed and found that Aristotles summary was pretty accurate. I found some Internet articles by Presbyterians on the conservative extreme saying no images of Jesus anywhere. I think a more moderate view would allow some images but not in the actual place of worship. I checked with Calvin. He makes distinction between images for historical education and images for place of worship. He passes by the first with a sort of toleration and proceeds to excoriate the images involed in worship. My wife in her youth had experience with baptists. She says private pictures Jesus ok. Their position in church might vary with different pastors.(there is variety with Baptists)

I have some personal interest in art history so considered Protestant art. It is Bruegel , the carrying of the cross and the Rembrandt paintings that come to mind as favorite Jesus images in a Protestant context. Actually the Max Beckman images are my favorite 20th century images of Jesus. There have been more than enough saccrine or corny images.

I like Jesus role in art but have created a reason to question that in pointing out the role images can play in racism. I can defend some by considering that people make images of Jesus largely from their own culture. Those are the faces they know and relate to. It is extremely unlike that images of Jesus will disappear. Perhaps it is best that people realize that they are not what he really looked like but instead are images expressing doctrines or feeling people want to express about Jesus.
Top

Gad I have barely any time right now but will put up images about some things you mentioned. I'll return to this thread later.

The cults book was probably this.

Images of Jesus that I grew up with in a non-denominational church where the pastor was schooled at Bob Jones University. I would describe it as a traditional Protestant church. They're still in the church and I had these in my home also on things like book marks from the Bible bookstore in Asbury Park. 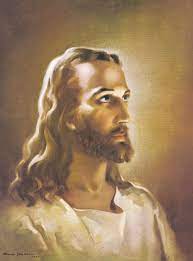 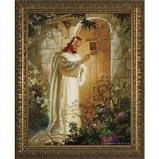 I saw you say he said that images aren't okay for Baptists? What is he talking about or did I misread it? I grew up in the church I described above. I was baptized Presbyterian as a baby, later baptized as a youth in my Protestant church. Our church didn't have a bapistry at the time so I was baptized in the local Baptist church. Later became a member of a Southern Baptist Church. I now self identify as Christian for what it's worth if anything.

I got all excited because I thought the link to the random dice generator would randomly pick a new picture. No luck.

I think I recognize the top picture as being in the chapel I attended most as a kid.
“Those who can make you believe absurdities, can make you commit atrocities.” -- Voltaire
Top
Post Reply
49 posts