The Off-Topic forum for anything non-LDS related, such as sports or politics. Rated PG through PG-13.
Post Reply
123 posts

Roundabout Defense wrote: ↑
Wed May 04, 2022 8:30 am
Dirty deeds done in silence was what Chief Justice Snidely Whiplash dedicated his life to and now leakers are unveiling the dastardly plot ahead of time! It ruins the suspense when we would otherwise have learned that young Nell was squished under the train wheels!!!

Don't forget about that so-called "passenger" on the RMS Titanic who blabbed, "It's sinking." The White Star Line should be able to terminate their voyage. Perhaps it was a servant for that unsinkable liberal Molly Brown who should have kept the hatches battened down instead. Loose lips sink ships!
Cry Heaven and let loose the Penguins of Peace
Top

In my opinion, there are at least 3 conservative justices on the current Supreme Court who ought to be seriously considered for impeachment. Clarence Thomas, Neil Gorsuch and Brett Kavanaugh. I think a strong case can be made that Gorsuch and Kavanaugh, at least, lied under oath during their confirmation hearings, and should never have been confirmed, and in Kavanaugh's case, I am not primarily considering the sexual abuse allegations against him. I more concerned about Five Times Brett Kavanaugh Appears to Have Lied to Congress While Under Oath, though the sexual misconduct allegations, if true, should also be damning in themselves.

I don't think very highly of the other 3 conservative Justices on the court either, though of those 3, my impression is that John Roberts is the least objectionable, most amenable to sound reason and probably the best qualified. Probably the least qualified of those 3 is Amy Coney Barrett, who among other considerations, still thinks that climate change and the need to drastically reduce greenhouse gas emissions is a scientifically controversial subject, which is simply not the case according to more than 97% of the world's scientists, and more like 99.9% of scientists with actually relevant first hand expertise in climatology. As you can see if you click on the link I provided, she is one big potential conflict of interest when it comes to legal issues concerning climate change and environmental pollution, as her father was a leading attorney for Shell in court cases involving climate change. It is questionable whether her integrity and fairness can be relied on, at least in those issues. For that alone (aside from her extreme views on abortion and women's health issues) she was arguably a poor choice for Supreme Court.
No precept or claim is more suspect or more likely to be false than one that can only be supported by invoking the claim of Divine authority for it--no matter who or what claims such authority.
Top 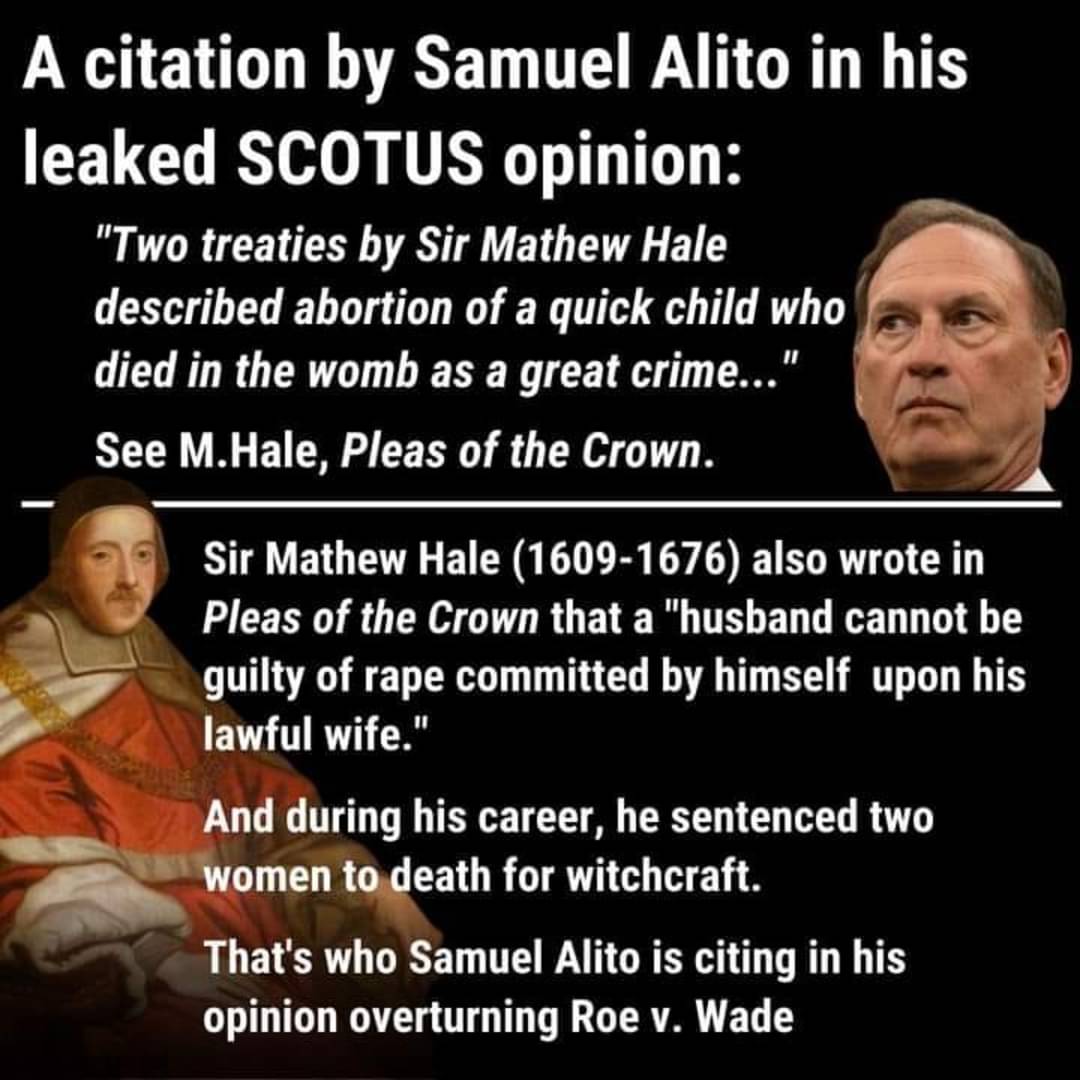 "I am not an American ... In my view premarital sex should be illegal" - Ajax18
Top

NPR wrote a good article that quotes what the conservative justices said about Roe v. Wade at their confirmation hearings. https://www.npr.org/2022/05/03/10961083 ... n-hearings

In my opinion, they left themselves more wriggle room on the topic of precedent and overturning precedent than some of the media articles I've read imply. I did think it was odd to include the fact that Roe was still controversial in the public eye as a ground for overruling it. Having seen the quotes, I think that's aimed at getting Coney Barrett's vote.

My opinion of Collins and Murkowski remains low.
he/him
"Everything we see hides another thing, we always want to see what is hidden by what we see."
– Rene Magritte
Top

"Two treaties by Sir Mathew Hale described abortion of a quick child who died in the womb as a great crime..”

See M.Hale, Pleas of the Crown.

Maybe we need term limits for the Justices, so that the law of the land isn’t subject to reinterpretation under the influence of senility.
Top

"Two treaties by Sir Mathew Hale described abortion of a quick child who died in the womb as a great crime..”

See M.Hale, Pleas of the Crown.

Maybe we need term limits for the Justices, so that the law of the land isn’t subject to reinterpretation under the influence of senility.

I hope that meme came with a warranty...
he/him
"Everything we see hides another thing, we always want to see what is hidden by what we see."
– Rene Magritte
Top

Here is a rejoinder with Fox's reasoning:

Delicious. And almost too true to be satirical.
Maksutov:
That's the problem with this supernatural stuff, it doesn't really solve anything. It's a placeholder for ignorance.
Mayan Elephant:
Not only have I denounced the Big Lie, I have denounced the Big lie big lie.
Top

But ... that's just, like, a straight documentary?
Maksutov:
That's the problem with this supernatural stuff, it doesn't really solve anything. It's a placeholder for ignorance.
Mayan Elephant:
Not only have I denounced the Big Lie, I have denounced the Big lie big lie.
Top

And there is this:

A University College London scientist has accused lawyers in the US of misusing his groundbreaking work on the brain to justify the dismantling of Roe v Wade, the landmark ruling that legalised abortion nationally in America.

Giandomenico Iannetti said his research, which used imaging to understand the adult brain’s response to pain, had been wrongly interpreted to make an anti-abortion argument.

Last week an unprecedented leak of a draft legal opinion showed a majority of supreme court judges support overturning Roe v Wade and ending federal protections for abortions, in a move that could result in 26 states banning it. The court is considering a case, Dobbs v Jackson Women’s Health Organisation, which challenges Mississippi’s ban on abortion after 15 weeks gestation.

Anti-abortion lawyers in that case argued that scientific understanding has moved on since the court’s 1973 ruling that enshrined the constitutional right to abortion, and it was no longer accurate to say foetuses cannot feel pain before 24 weeks.

Their argument relied heavily on a controversial discussion paper on foetal pain published in the Journal of Medical Ethics in 2020 by Dr Stuart Derbyshire, a British associate professor of psychology at the National University of Singapore.

The paper claims that some of Iannetti’s research results suggest we might not need a cerebral cortex – which remains undeveloped in a foetus of less than 24 weeks – to feel pain.

Iannetti, an Italian professor of neuroscience who now leads a laboratory in Italy but spent the past 16 years researching at UCL and Oxford University, is adamant that this is “an unjustified leap”.

“My results by no means imply that the cortex isn’t necessary to feel pain. I feel they were misinterpreted and used in a very clever way to prove a point. It distresses me that my work was misinterpreted and became one of the pillar arguments they [the lawyers] made,” he said.

Prof Iannetti had no idea the paper was being used to justify the dismantling of Roe v Wade until American colleagues contacted him to say they were “shocked” at the way his findings were being presented. He helped academics in the US to draft a response for the lawyers but says he feels it is out of his control and “there isn’t much more I can do to stop people claiming my work says something it doesn’t”.

Leading pain scientists and academic medical societies on both sides of the Atlantic strongly dispute the anti-abortion legal argument, insisting the international scientific consensus that it is not possible for foetuses to experience pain in the first few weeks of existence remains firm and “irrefutable”.

John Wood, professor of molecular neurobiology at UCL, said: “I thought this opinion piece [by Derbyshire] was inaccurate.” Wood insisted that “all serious scientists” agreed a foetus cannot feel pain until 24 weeks, “and perhaps not even then”.

He said lawyers were right to say that science has moved on since 1973, but not in the way they were claiming. “For instance, we understand a great deal more about pain in newborn babies,” he said. “Interestingly surgeons who operate on foetuses say that there is movement on surgical intervention from week 36.”

Derbyshire told the Observer he is “firmly pro choice”. He insisted that he had not overstepped in his paper, and claimed that while Iannetti’s work had nothing “directly” to do with foetal pain it had “unsettled the consensus that the cortex is necessary for pain”.

He said: “I don’t honestly see how we can rule out the foetus having some raw experience that is akin to pain. It may be for ever unknowable, and it will not be an equivalent to what you or I experience, but that does not make it nothing.”

Prof Vania Apkarian, director of the Centre for Translational Pain Research at the Feinberg School of Medicine in Chicago, who has spent two decades studying pain in humans and animals, said the evidence on foetal pain had not changed since 1973 and remains “irrefutable”.

“There is no rational basis for arguing a foetus can suffer pain before 24 weeks. The anatomy of the brain is not formed enough for that to be possible,” he said. “The foetus is in an essentially sleep-like state in the womb.”

Apkarian wrote the scientific briefing for the Jackson Women’s Health Organisation case, on behalf of organisations including the Society for Maternal-Fetal Medicine in the US and the Royal College of Obstetricians and Gynaecologists in the UK. He spent months checking all the anti-abortion scientific references in case his side had missed some piece of serious evidence. “We hadn’t,” he said.

Apkarian believes science has been roped into a social and religious battle over abortion in order to play on people’s emotions. “The Mississippi case claimed that the foetus, when aborted, is suffering. They claimed that because it is such an emotionally highly laden statement. But it is also totally untrue,” he said.

Maksutov:
That's the problem with this supernatural stuff, it doesn't really solve anything. It's a placeholder for ignorance.
Mayan Elephant:
Not only have I denounced the Big Lie, I have denounced the Big lie big lie.
Top
Post Reply
123 posts