Following the the Supreme Court decision I've been seeing so many news outlets, especially local news, make the erroneous claim about the "heartbeat" trigger laws, saying it is at 6 weeks because that is when a fetus has an actual heartbeat. This is so wrong. At 6 weeks most women don't even know they're pregnant and there is no cardiovascular system in the fetus at that point. The slight flutter than can sometimes be heard is from the machine. There is no "heart" that's pumping blood. But news outlets just repeat it because that's what republican governors say.

Then I see other examples like CNN where they let these idiotic religious nuts rant on and on about how glorious this decision was because it "protects the unborn" yaddi yaddi ya.

CNN gave an anti-abortion leader 11 minutes to spout B.S. including the absurd claim that IVF can be murder

Do you think FOX News would ever in a million years allow a pro-choice advocate to get a word in without being shut down immediately?

Liberal media! Yeah, right. They're still doing the same inept crap they were doing back in 2015 which handed the election to Trump by letting the fake scandal about emails drive their coverage leading up to the election. They completely dropped the ball on the Access Hollywood tape which screamed to the American people, "DO NOT LET THIS SCAM ARTIST RAPIST BECOME PRESIDENT" and instead went full "squirrel" because they were afraid ignoring the FOX News redirect would make them seem less objective.
Top

Meanwhile over at FOX, no mention of any of the historical legislation passed by Biden nor is there any mention of Republicans blocking the Veterans Pact ACT out of pure spite.

Instead we get this piece of fake news about the border "wall" that was debunked months ago. This image sums up FOX nicely, from the endorsement of epic moron Herschel Walker, to the main headline and the other stories to the left: 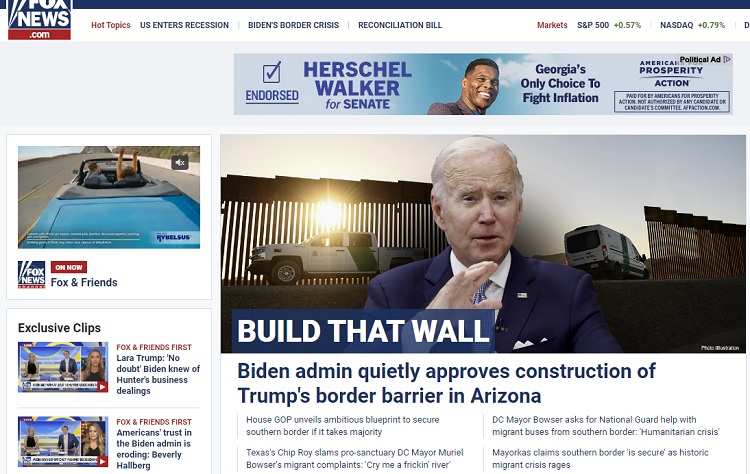 
It is amazing to think this station calls itself legitimate journalism. It is nothing more than a propaganda arm for the Republican party.
Top

Vēritās wrote: ↑
Fri Jul 29, 2022 12:32 pm
It is amazing to think this station calls itself legitimate journalism. It is nothing more than a propaganda arm for the Republican party.

The GOP base doesn't value integrity. Why should Fox? Their viewers go there exactly for the idiotic pablum they're fed to help their upset tummies to sleep at night, poor little sheep, not realizing what they're fed is laced with irrational rage.

I am absolutely condescending toward Fox viewers. They are voluntary imbeciles craving B.S..
Religion is for people whose existential fear is greater than their common sense.
Top
Post Reply
3 posts • Page 1 of 1