The Off-Topic forum for anything non-LDS related, such as sports or politics. Rated PG through PG-13.
Post Reply
12 posts

This November Sen Mike Lee, the Trump-endorsed candidate, will face off against Evan McMullin, of the Independent Mormon Party. The Democrats declined to nominate a candidate and decided to back McMullin as a much better alternative to the Trump endorsement. To give you an idea about Lee, his best friend in the Senate is Ted Cruz, but he is happy to carry a bucket for Trump anywhere on the grounds of the Versailles Palace. Anyway, all this confirms is that Utah is unlike anywhere else on Earth (but does share some similarities to Oblibish of the Kolob Federation). Lee explains the LDS belief that in an early dispensation, Ronald Reagan rode on a velociraptor firing a machine gun. It is meant to show Mankind being booted out of the Garden of Eden for excessive credulity.
Cry Heaven and let loose the Penguins of Peace
Top

This picture represents everything dumb about America. It could be the icon, the primary symbol of American stupidity.
Religion is for people whose existential fear is greater than their common sense.
Top

This picture represents everything dumb about America. It could be the icon, the primary symbol of American stupidity.

This painting looks like the mind world of Jon Mcnaughton but the style of painting is clearly different. Anybody know what it is?
Top 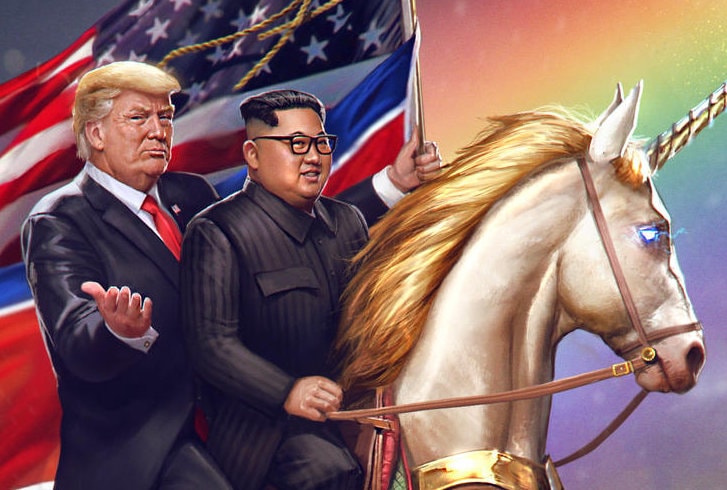 It does have a Jon McNaughton-like quality, but it is by Jason Heuser.

Senator Mike Lee worships these two men. He likens them to President Dallin Oaks. Talk about a Trump Believing Mormon!
Cry Heaven and let loose the Penguins of Peace
Top

It does have a Jon McNaughton-like quality, but it is by Jason Heuser.

Senator Mike Lee worships these two men. He likens them to President Dallin Oaks. Talk about a Trump Believing Mormon!

It's already bad enough that Mike Lee supports Trump, but is it really true that he also admires and approves of Kim Jong Un?

By the way, I can hardly think of a worse put down for Dallin Oaks than to have either Kim or Trump likened to him. However, if Oaks is a Trump fan himself, after all Trump has done, especially the attempted insurrection, then he fully deserves to be likened to both Kim and Trump.
No precept or claim is more suspect or more likely to be false than one that can only be supported by invoking the claim of Divine authority for it--no matter who or what claims such authority.
Top

I know that some folks believe that man and dinosaur simultaneously occupied the same historical moment in time, but I didn’t figure that Reagan was around for that many years.
Top

canpakes wrote: ↑
Thu Jul 28, 2022 9:50 pm
I know that some folks believe that man and dinosaur simultaneously occupied the same historical moment in time, but I didn’t figure that Reagan was around for that many years.

I never cease to be amazed at the ridiculous crap so many adults believe (not talking about Reagan - just the dino-riding cavemen these people believe in is enough to wonder about their ability to reason).

There is no doubt in my mind that living a religion makes people dumber.
Religion is for people whose existential fear is greater than their common sense.
Top

canpakes wrote: ↑
Thu Jul 28, 2022 9:50 pm
I know that some folks believe that man and dinosaur simultaneously occupied the same historical moment in time, but I didn’t figure that Reagan was around for that many years.

The Reagans and the Case of the Menacing Mormon Missionaries

We were having breakfast on the Veranda at Rancho Del Cielo just like we do every morning since we retired. I was mentioning to Mommy the time that Bonzo lunged at me on the set and had me pinned down while he crumpled up my pack of Chesterfields. "Damn ape wouldn't know a good smoke from a hole in the ground." Mommy just kept eating her apricot jam on toast like she had heard that story for the hundredth time. "That's nice Ronnie Dear", was all she said though I suspect she was not even listening because she pointed to two hooligans who were walking from around the corner of the house. I wondered if these two had accosted the guard at the gate. "Don't panic and let me do the talking I whispered to Mommy as these hooligans drew near. I knew that if worse came to worse I could always draw the Remmington I kept taped under the table. I learned that trick while working on Hellcats of the Navy.

"We've come to tell you about the True Gospel™," they said as they sat down next to us. I could tell Mommy was so panicked by this intrusion that she was unable to push the security button. All she could do was let out a small hissing sound.

I spoke up, "You better make this quick, Mommy needs to go lay down". The two thugs who were threatening us started to tell a strange story about gold and an angel. They went on and on and each one said they knew this to be absolutely true and then they said something about the name of Jesus and amen.

Mommy was still panicked and all I could do to help calm the situation was to ask how they could be certain about this story. That is when one of the young punks stuck out his chest and said it was because of NHM.

At least I understood that part about NHM. I told them that Mommy and I had seen those LaBrea Tarpits at the Natural History Museum more than once and that the fossils seemed genuine, but that I would feel more favorably inclined if the museum was located in Orange County. I added that at least it wasn't at Berkley where those students were liable to say whatever came into their pointy heads and would burn our sacred flag to boot. Mommy agreed because she stopped hissing and a tear ran down her cheek.

That was my cue to grab the security buzzer from Mommy and give it a good pressing. Don't know what the Secret Service guys did with those young punks, but at least they won't be around threatening our lives anymore with that talk about the Natural History Museum in LA.

I was a bit disappointed in not being able to try my fast draw I practiced so hard on, while on the set of Death Valley Days, but as they say at the Bohemian Grove, "All's swell that ends well".
Cry Heaven and let loose the Penguins of Peace
Top

i am not familiar with this Jason but I find my self wondering if he is being less than straightforward serious .It is possible that he is a bit tongue in cheek knowing that Trump is ridiculous.
Top
Post Reply
12 posts