Many of you are now aware of the stunning scholarly revelations showing that John Dee and Edward Kelley, Elizabethan wizards, translated the Book of Mormon and communicated the results to Joseph Smith through his seer stone. Although critics and Mopologists alike will resist these important new findings, they will inevitably be accepted as the new status quo, when the realization that this is the only truly parsimonious explanation for the English archaisms in the book is finally embraced.

In the meantime, those of us who have not been blinded by fear and prejudice will forge ahead in our exploration of the profound implications this discovery has for our interpretation of Joseph Smith's work, the Book of Mormon, and Mormonism itself. In that spirit, I offer you a visual hint that Dee anticipated, and may have been planning for, his task of communicating hidden truths to Joseph Smith over two centuries later.

The above symbol is John Dee's secret code name which he used in his "eyes only" communications with the Queen. The two circles stand for Dee's eyes, which represent his function as intelligence agent for the throne. Of course, given his occult interests, these circles probably also referred to his pursuit of supernatural vision and the philosopher's stone.

The long bar on the top, which looks like a square root symbol, may very well be an elongated seven. So, there we have it. 007. This would later be used as the codename for the James Bond character. But, we need to think of its occult significance. 7 is obviously a magical number indicating divine perfection. So the supernatural vision of Dee seeks after divine things.

Consider this too, however. Could it be that John Dee, having achieved that vision of the future, saw his 19th century working partner Joseph Smith receiving the translation? 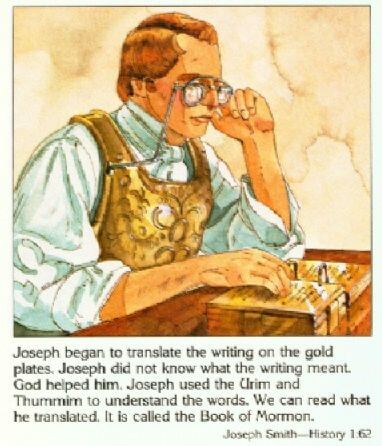 That's right, the famous spectacles that were buried with the plates, which later came to be known as the Urim and Thummim. Might it be that John Dee had seen these spectacles through his second sight, and that he yearned to recover them? Only after death would he work with Joseph Smith using this instrument to communicate with him and Edward Kelley in the process of transmitting the Book of Mormon.
"Petition wasn’t meant to start a witch hunt as I’ve said 6000 times." ~ Hanna Seariac, LDS apologist
Top

You'll find the connection goes much, much deeper than you could have possibly imagined.

We all know the symbol 007 is also associated with James Bond, the famous spy from MI6. Check this out:

Mormon Leaders still acknowledged their necessary connection with the USA. Paradoxically, perhaps, they partnered Eliza Snow's 'Ode' with a James Bond that did celebrate 'Independence' and they did play the 'Star Spangled Banner'.

There is no doubt in my mind Reverend, you would have been a huge star if you had decided to take your numerous talents to the old FARMS.
"I'm on paid sabbatical from BYU in exchange for my promise to use this time to finish two books."

Most stunning of all, however, may be the role of John Dee and Edward Kelley in restoring the temple endowment. This veil-rending discovery will send the critics running for the hills. Before long, the world will come to know that Joseph Smith received revelation from Dee and Kelley. Remember, that you saw it here first, thanks to Cassius University.

The angels in communication with Dee told him that the ring they had designed for him bore the same design Solomon had used to control demons.

Harkness, John Dee's Conversations with Angels, 37 wrote:Dee received detailed instructions for both the ring and the lamine. According to the angel Michael, the ring was to be made of precious metals and inscribed with the name "PELE." ... PELE... could be found... in Agrippa's De occulta philosophia. Dee went on to insert PELE in the margins of Dionysius the Areopagite's "Divine Names" next to a passage that mentioned the "wonderful 'name which is above every name.'" Dee's interest in the ring increased when the angel Michael asserted that its design had not been "revealed since the death of Salomon," the archetypal biblical figure of wisdom. Michael went on to describe how Solomon's ring enabled him to perform his "Miracles, and divine works and wonders." Similarly, Dee needed the ring to perform the tasks God would set him. "Without this ring," Michael told Dee, "thow shalt do nothing."

Here is a modern recreation of the ring: 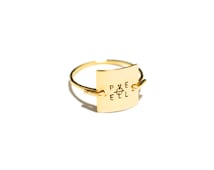 Here is another unusual and erroneous (but interesting) explanation of the ring's design:

The letters PELE (Latin for "he will work wonders") were inscribed in the four corners. In the center was a circle with a horizontal line through it, with the letter "V" above and the letter "L" below.

You'll find the connection goes much, much deeper than you could have possibly imagined.

Why, thank you, Everybody Wang Chung. You are correct when you say that we have not reached the bottom of this revolutionary line of research. It is a deep well indeed.

My guess is that FARMS couldn't handle this. I doubt anyone in "mainstream" Mormon scholarship can take it yet. One day, however, it will be scholarly orthodoxy.
"Petition wasn’t meant to start a witch hunt as I’ve said 6000 times." ~ Hanna Seariac, LDS apologist
Top

If we reverse the letters of Aleph (ALP) we get Pele (PLA), which is Hebrew for "Miracle". It also has the value of 111, particularly since it doesn't use the final form of Peh. For anyone familiar with Enochian, Dee's ring included the letters PELE on it, and was referenced as meaning "Worker of Miracles".

Interestingly, it seems that PELE is also a word meaning "Hidden Wonder," and it is a title of the Qabalic Sephiroth "Kether," the crown.

I found this highly informative article exploring and decoding Dee's ring. Anyone who went through the temple before the changes in 1990 will find this most intriguing.

Fr. Sharash, Play with PELE wrote:Eventually, I got to the part describing the Ring.

“It shewed to be a Ring of Gold: with a seal graved in it: and had a rownd thing in the myddle of the seale and a thing like a V, throwgh the top of the circle: and an L, in the bottom: and a bar ——— cleane throwgh it: And had these fowre letters in it, P E L E.”

I’ve seen this ring quite a number of times and have always wondered what PELE referred to (aside from a Hawaiian Volcano Goddess and a Brazilian soccer player). Benjamin Rowe, describing the ring states: “The letters PELE (Latin for: he will work wonders) were inscribed in the four corners.” The problem with this translation is that it’s not Latin, it’s Hebrew.

Agrippa mentions in Book III Cap.11 of The Occult Philosophy, “that place in Judges” where the word pele or peli is used in the sentence: “Nomine meum quod est (Peh Lamed Aleph)”; meaning, “My name, which is [Peh-Lamed-Aleph]”. All I found in Dowry-Raines was the word mirabile (miraculous) where Agrippa said PELE should be. Due to this, I thought for a little while that it might just be the English “Aleph” spelled out in reverse—you know—the way Hebrew is normally written, right to left.

My research lead me to an Old Testament Hebrew version of Judges 13:18. There it was: alp, which in any Hebrew-English dictionary or concordance means, “wonders or miracles.” Perhaps to avoid confusion, these letters should be substituted in Hebrew on the ring instead of the Roman letters PELE.

One very interesting thing I’ve noted on the ring is the center design. It is extremely curious that Dee, in the paragraph on the ring says to use a “thing like a V” instead of just “V” in contrast to the very specific “and an L”. But if one notes the way the circle cuts through the V and L; turning the design upside down, the “thing like a V” becomes a thing very much like an “A.” And most have probably already put two and two together and noted that this spells “AL,” a very well known name of God. Again, it is my feeling that this should probably be in Hebrew also.

As an aside, regardless of how Dee translated PELE; my favorite theory is that it may have meant originally to be transmitted as ELEP (Aleph Lamed Peh) in reverse. This makes sense if you consider how Dee spells EMETH, (Aleph Mem Tau), and how some of the Enochian “mysteries” were transmitted in reverse, such as the word SOYGA from the Book of Soyga. Soyga is ‘Agios’ (Greek for “Holy”) spelled backwards. Thus, it would be no surprise to me if PELE were a phonetic reversal of Aleph. The only thing keeping me from buying into this whole cloth is a further message from Michael concerning the ring:

“Wonders are in him, and his Name is WONDERFULL: His Name worketh wonders from generation, to generation.”

In any case, I’m pretty firm in my belief that however you decide to translate PELE, it should certainly be spelled correctly and in the proper language!

Here is the angelic transaction that gave birth to the ring:

MichaÃ«l: After this sort must thy Ring be. Note it.


Dee - Then he rose and disappeared out of the Chair. And by and by
came again, and said as follows:


MichaÃ«l: I will reveal this Ring which was never revealed since
the death of Solomon; with whom I was present, I was present with
him in strength and mercy.
Lo this is it; This is it where with all Miracles and divine
works and wonders were wrought by Solomon:


Dee - Then he laid the Ring down upon the Table and said:


Dee - It shewed to be a Ring of gold: with a seal engraved in it, and
had a round thing in the middle of the Seal, and a thing like a V
through the top of the circle, and an L in the bottom, and a bar
clean through it.

After that,he threw the Ring on the board or Table; and it
vi. seemed to fall through the Table, and he said thus:


MichaÃ«l: So shall it do, at thy commandment.
Without this thou shalt do nothing.
Blessed be his name that compasseth all things.
Wonders are in him, and his Name is WONDERFUL:
His name worketh wonders from generation, to generation.

And remember, folks, if you think it is strange that the angel Michael is revealing this stuff, just remember that he was once Adam, and he used these very words after he was cast out of the Garden into the lone and dreary world. Who else would reveal them to Dee?
"Petition wasn’t meant to start a witch hunt as I’ve said 6000 times." ~ Hanna Seariac, LDS apologist
Top

The symbols on the ring. The compass, the square, the "kneemark".

God is consistent!
It is better to be a warrior in a garden, than a gardener at war.

Some of us, on the other hand, actually prefer a religion that includes some type of correlation with reality.
~Bill Hamblin
Top
Post Reply
17 posts