Church officials respond to missing Anubis snout in Facsimile No. 3

Church officials respond to missing Anubis snout in Facsimile No. 3

I'm posting this thread where information can be collected and posted regarding upcoming responses from the Church about this very important controversy concerning the authenticity of Facsimile No. 3, published by the Church in the Book of Abraham. Litigation or legal action by those who ascribe to beliefs and values of the ancient Egyptian religion or who have been misled to believe Joseph Smith translated ancient Egyptian may file class action suit against the Church and sue for damages -- in the BILLIONS of dollars which the Church readily has available in its secret account which has been kept from the members of the Church.

The original discovery and some continued discussion of the jackal snout is found in these Mormon Discussion links:

I'm confident this matter will be publicly addressed by BYU Egyptologists and Church officials who are responsible for the continuous slander in publishing Facsimile No. 3, with its accompanying Explanations in The Pearl of Great Price.

Two things need to happen in order to alleviate Defamation of Character and slanderous statements towards the deities of another religion, namely the ancient Egyptian religion.

1. Restore the snout of the jackal god Anubis in a corrected version of Facsimile No. 3
2. Cease the publication of the Explanations in Book of Abraham canon.

Anubis in Facsimile No.1, is Anubis

Original Papyrus of Facsimile No.1 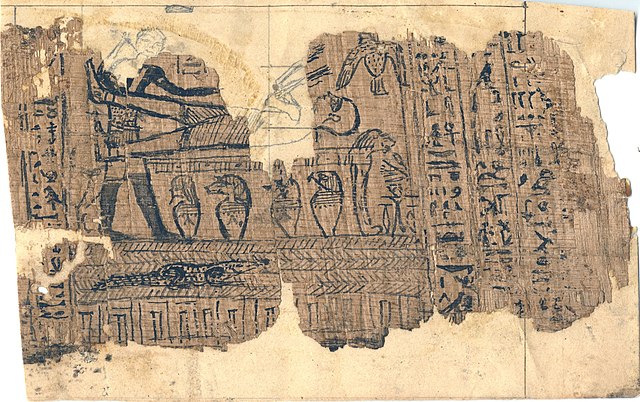 First, let me say that I'm going to speak plainly. I'm not going to attempt to dazzle you with references, footnotes, fancy terms, technical jargon, or pretended scholarly credentials. I'm not even going to appeal to authority! When you read what I have to say, you'll know within yourself that it's true. You'll know in your mind and heart that the truth resonates with you because it rings true. What you do with that understanding is entirely up to you. Dr. John Gee and Kerry Muhlestein can accept and embrace it or they can deny and reject it as they fight and resist but deep down they know it's true. I know they know it's true and in that there is edification.

In the scene above we see Anubis standing proudly before an honorable funerary lion bed on which the first pharaoh of Egypt (Osiris) and husband to queen Isis, emerges and rises up as a living spirit and soul. Blessed be Osiris in receiving the blessing in the presence of Anubis who extends his embalming hand of healing and protection wherein is a cup of life. Anubis holds the blessed cup and he carries the sacred ankh.

Under the lion bed are four Canopic jars that contained the embalmed vital organs of Osiris prior to resurrection and divine fertility. These are figurative of the four sons of Horus who are future grandchildren of king Osiris through his son Horus who is being conceived by Isis while her husband rises on the royal lion bed. The divine representation of life and fertility is manifest in combination with the gods who breathe life into Osiris who lives forever.

Amen.
THE BOOK OF ABRAHAM FACSIMILE NO. 3
Includes a startling new discovery!

How many knobs are there? Five are visible, one is lost in the lucuna, and another is behind the legging of Anubis' kilt. That makes seven knobs which is an Egyptian lucky number!

What could this mean?

The number seven was apparently the Egyptian symbol of such ideas as perfection, effectiveness, and completeness.

Seven thousand barrels of red beer were used to trick Sekhmet out of killing.
In her search for her husband's pieces, the goddess Isis was guarded by seven scorpions.

The lowest amount that the Nile flooded to solve the famine was seven cubits. The highest was 28 cubits (four times seven).

Set tore the god Osiris’ body into fourteen pieces: seven each for the two regions of Upper and Lower Egypt.

The Gold symbol has seven spines on its underside.


Now, for fun and giggles, let's try something a little more esoteric:


Tehuti Research Foundation wrote:
The universal cyclical number par excellence is SEVEN. Seven of something frequently makes a complete set—the 7 days of the week, 7 colors of the spectrum, 7 notes of the musical scale, etc. The cells of the human body are totally renewed every 7 years.

The Egyptian word for the number seven is Sab-aa, which is the same word for Lion.

One of Osiris’ titles was The Lion; the same word as Seven.

The zodiac sign of Leo was chosen to signify the time of the year when lions go to the water’s edge to drink at the beginning of the rainy season.

Not only is Osiris is related to the number seven and to the Lion, but he is also associated with water supply, as we will see later herein.

Since Osiris represents the latent power of resurrection to begin a new cycle, the Egyptians depicted the deathbed in the shape of a lion being number seven (being Osiris).


That ties it! It's Osiris on his lion bed and that's got to be Anubis! Wouldn't you say?

Raising the Abrahamic Discourse:
An Essay on the Nature of Dialogues About the Book of Abraham by Kerry Muhlestein | Aug 25, 202

And from Mormon Discussions:

Kerry Muhlestein responds by aussieguy55
Last edited by Guest on Sun Aug 30, 2020 4:39 am, edited 1 time in total.
THE BOOK OF ABRAHAM FACSIMILE NO. 3
Includes a startling new discovery!

Shulem has you seen this on Facsimile 3. https://scholarsarchive.byu.edu/etd/7598/
Mores or less a summary .Note page 40 a comparison between Ritner and Rhodes
Hilary Clinton " I won the places that represent two-thirds of America's GDP.I won in places are optimistic diverse, dynamic, moving forward"
Top

Shulem note this on page 36 ""Since the metal printing plate is the oldest known extant illustration of the
Facsimile, it is worth considering the most likely process by which it was made, and how it may
have affected the overall accuracy of Hedlock’s work.17"
Hilary Clinton " I won the places that represent two-thirds of America's GDP.I won in places are optimistic diverse, dynamic, moving forward"
Top

It was the Printers fault.
"Joseph Smith’s journal indicates that he only
visited the printing office once during the two weeks that typesetting for the issue containing
Facsimile No. 3 would have occurred, and unfortunately mentions no specifics of the business he
engaged in there.63 Furthermore, on the day Facsimile No. 3 was supposedly published, his
journal indicates that he never visited the printing office until late in the evening, and even then,
only to discuss certain matters with Brigham Young and several other brethren.64 On the other
hand, Wilford Woodruff, who had the privilege of assisting in the publication of previous
portions of the Book of Abraham, seems to have been present in the printing office the entire
day.65 The involvement of others besides Joseph Smith in the final publication of the Facsimile,
then, seems likely.
Hilary Clinton " I won the places that represent two-thirds of America's GDP.I won in places are optimistic diverse, dynamic, moving forward"
Top

Page 83 you get a mention regarding the one ear.
Hilary Clinton " I won the places that represent two-thirds of America's GDP.I won in places are optimistic diverse, dynamic, moving forward"
Top

Thanks for posting. Yes, I saw that dissertation you linked above only a few weeks ago and briefly skimmed it. Now that you've linked it I will be committed to go back and review it.

Yep, blaming the scribes and printers and everyone else for Joseph Smith's problems seems to be the old apologetic fallback. But, concerning the Times and Seasons during this era there can be no doubt that Smith was intimately involved in the Book of Abraham publication and worked closely with WILFORD WOODRUFF, an apostle, who was specially commissioned in seeing to it that everything was done in order and decently as prescribed by the PRESIDENT OF THE CHURCH. Woodruff later canonized the whole kit and caboodle almost as soon as he became Church President.

So, if they want to blame Woodfruff, let them. They can also blame him for canonizing the damn thing which he did first chance he got. They can also blame Oliver Cowdery (The Second Elder of the Church) for his part in producing the uninspired Egyptian Alphabet and Grammar. Just blame everyone else except for Joseph! In my mind it's kind of like saying that the getaway driver for bank robbers is innocent because he didn't actually rob the bank but was innocently and unawares sitting in the car during the actual crime. So they blame the robbers and not the driver who provides the final means whereby the crime could be successfully pulled off.

Joseph Smith was the driver of the Egyptian Alphabet and Grammar and he as Church President was responsible for the contents in those notebooks that were taken west in apostle Willard Richards suitcase to Utah. They were put in the First Presidency vault for a reason and are forever linked to Joseph Smith. 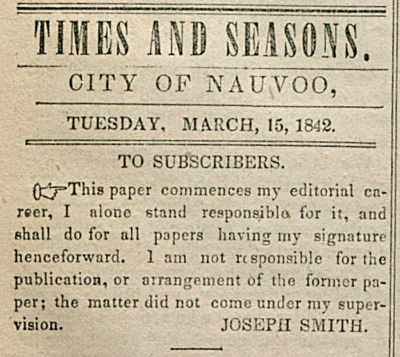 Seven thousand barrels of red beer were used to trick Sekhmet out of killing.

Has anyone tried to track down the records from Guinness Brewery to confirm this story?
Cry Heaven and let loose the Penguins of Peace
Top
Post Reply
10 posts • Page 1 of 1